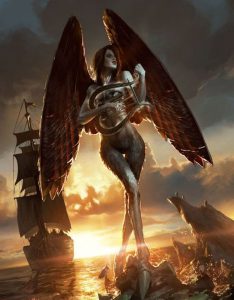 In ancient Greek mythology, Sirens were feminine temptresses, half-bird, half-seductive women, that sailors would encounter on rocky shorelines and cliffs.

These Sirens would sing beautifully and beckon the sailors to come closer. It’s said that their song was so magical, so beguiling, so utterly irresistible that the sailors would throw caution to the waves and sail their ships right towards these aquatic Venus Flytraps.

Unfortunately, their ships would then quickly shipwreck amidst the boulders and crags, and they would either drown (the better fate) or see these beauties, who so alluringly hypnotized them earlier, fly down and, um… tear them to pieces for lunch.

Hey, a girl’s gotta eat, ya know? It probably came pretty natural to them, but to some of us, well…we need a little more guidance in how to learn to sing. Which is why I’m here. Fear not the rock-dwellers, oh musical soul – we shall best them yet!

Singing was my earliest ‘instrument’. It captured me quite early in life. Perhaps it was my mother’s soft songs as she put me to bed…

… or her humming during my naps…

… or the Boston album my brother Larry played constantly…

… or the incessant, after-school reruns of the Monkees that I just couldn’t get enough of…

You get the idea. I’m sure it was all of those and more that kept me singing through the years.

Speaking of more, maybe it was the 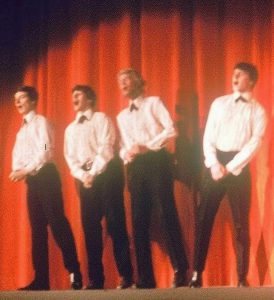 attention? High school, after all, did bring Men’s Choir, a barbershop quartet, leads in various musicals, and quite tough solos at church.

But it also brought some looks from some pretty fine girls to skinny, fro-headed me, and that was…ehhhh, let’s just say, that was nice!

With the popularity of Pentatonix over the last few years, “Pitch Perfect” and the good ol’ “High School Musical” movies, and before that the TV show “Glee” hitting such heights, singing is hotter than ever – a skill wanted not only for its effect on the listener, but for its social magic for the one singing.

Let’s take a closer look at this empowering, mesmerizing Siren’s gift, and see if we can catch it…without dying on the rocks!

The Siren’s Allure – It’s All in the… Folds! 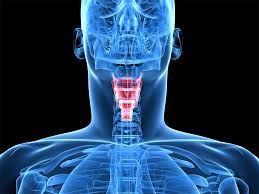 Singing is simple at first glance. Air passes through the folds of our vocal cords and, as they tighten or lengthen, we make sounds that are higher or lower, called pitches, or notes.

One of the cool things about the human voice is how singular it is – almost like an individual’s fingerprint. Why do we all sound so unique? Well, we all have variances. We differ in:

All these elements will influence, sometimes heavily, the sound of your speaking and singing voice. Inner and outer context is everything.

Take the blue whale for example: because his vocal cords are, um…shall we say significantly bigger than ours, its voice measures at 188 dB (most rock concerts are at 110 dB).

That, combined with him being in the water which carries sound better than air, is the reason you can hear him (ready for this?) 188 miles away!!

So, we must work with what we’ve been given. If we put the effort in, there is much to be gained…

The Perks of Being A Siren Now, er……

There are so many uplifting things about singing. You may have heard of people who can’t speak because of an illness, but they can sing to communicate.

There’s the old story of 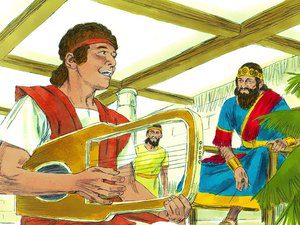 David, playing and singing to King Saul to calm him – we all can relate to music that makes us feel better!

People who suffer from stuttering often find that they can sing with no trace of the affliction, like Kylie Minogue…and even ELVIS!

Healthwise, the good singing does for your heart, respiratory system, posture, psyche and emotional stability is well-documented.

Singing acumen is mostly muscle development. Like working out. And just like in the gym, if you don’t use it you’ll lose it, with the exception of those who’ve put significant time and training into its development – they tend to be able to jump back on the horse with most of their skills intact (tho’ range does suffer).

Think about it: if more than one hundred muscles interact whenever you sing a note or even speak a phrase, doesn’t it stand to follow that the more you work out those muscles the stronger and more useful they’ll be?

It’s worth the effort, and you, and your future audiences, will reap the rewards!

The Cliffs Had Better Reverb

To make progress, consider deliberately where and when you’ll practice. As for where, believe it or not, bathrooms are great places for singing.

When sound has a lot to bounce off of it creates what we call reverb, or reverberation. It’s a type of very fast echo. You hear it on many hit songs all the time. 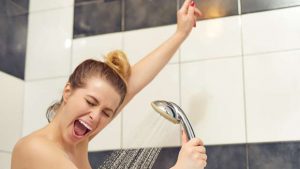 Which is why when you hear your voice with reverb in the shower…you sound like a star.

So get in there; open your mouth and sing, “Aaaaaaaaaahh!” Being a shower singer is better than not being a singer at all!

Your Voice in the Machine

These days, tho’, there’s another great option: at your computer.

With free recording software available with the click of your mouse, there’s no reason not to try recording yourself. It’s very inspiring & educational to hear yourself outside yourself, as everyone else hears you. That’s what recording reveals.

And there’s usually built-in reverb with recording software that you can click on that will make you sound like you’re in a concert hall…or somewhere bigger! 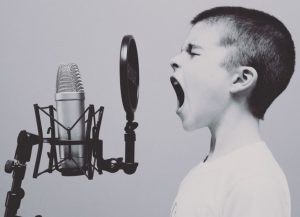 Try it. The only thing you’ll need is a cheap microphone that plugs into your computer. These you can get for under $20, like this one, so what are ya waiting for?

One caveat about the whole recording thing, thought: don’t be alarmed if you record yourself, hear it and don’t like it. That’s typical.

The reason? Our voice as we hear it is not only filtered through our ears but also through the bone of our skull, which modifies it significantly, typically giving it more resonance and bass.

In a word, it sounds better. So, when we hear a recording, without our “cranium filter”, it sounds very different, and to most people, especially at first hearing, it’s just not as pleasant.

So you’re not alone. But with regular recording sessions you can and should get used to how your voice sounds and what it can do. 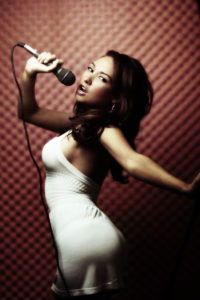 And as we say in the studio, “the tape don’t lie”, meaning if you want to investigate how good (or bad) you are, recording yourself will show you warts and all.

But what about when? How much should you practice? I tell my students they can make substantial progress if they just put in 20 minutes a day. But if you can only do ten, you’ll still see improvement.

You will find the discipline if it’s important enough. So ask yourself…is it?

Then find a time (maybe in your daily shower? You do take those, right??) that will be your consistent practice time, and go for it.

Nothing beats the feeling of working hard towards a goal and seeing progress. I wish that for you and your voice!

How to Earn A Cliff-side Lunch 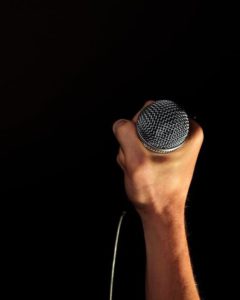 If you think you can’t sing (or others do), it’s probably because you fall short in one or more of these things:

I’d like to point out here that these are really three different skills, not one, and there are many exercises that can do to improve your skill level in each, or in only some, or one. You might be fine at the first two, but terrible at the third, or any other combination.

If you think you can’t sing your first task is to figure out if you’re good at any of those three. Then you can concentrate on the ones that you need work on instead of trying to study everything.

Here’s the good news about singing: you already kind of do – when you’re talking! The average normal speaking voice tone in women is the G note, below middle C on a piano.

For guys, it’s the C an octave below middle C.

This means that, as you talk, you actually are producing specific pitches, although obviously they rise and fall because of emotional and story-telling inflections you put in. 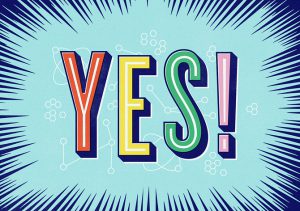 In light of that information, your first important goal is to prove to yourself (and others) that you can sing. How? Take a simple word and repeat it. I like to use the word “yes”. Just say it.

Now slowly start lengthening the vowel, the “e” sound in the word. See how long you can keep that “e” going. If you can go 2 seconds you’ve just sung a typical half-note in music!

You probably are “falling off” the end of the word “yes”, meaning you can hear your voice going down in pitch. Most people do. See if you now can hold that “e” sound but then just stop, without letting the pitch change. Then you have truly sung a single note, not just sloshed sounds around.

If you find your note getting sloppy, start over with the short word “yes”, and re-apply the same, slow elongating of the word until you can hold that note as long as possible. You might even use a stopwatch to make it fun.

Here’s what I don’t want you do though: demand yourself to be an instant star. Be patient; realize that singing skills take long periods of study and investment. There are short-term gains, but the long-term progress has the greatest pay-offs. 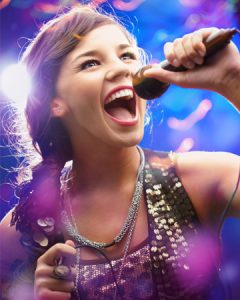 The longest sustained note by a human was by Richard Fink IV in 2009. He was able to hold a tone for one minute 43 seconds! Wow. Super Siren indeed.

Think you’re gonna be anywhere near him to start? Not a chance. But take little steps forward and you’ll soon see he’s a whole lot closer than you thought possible.

Also, don’t fret about your range (your lowest note to highest note). Range comes with time. So does good tone.

For inspiration, though, feel free to look up Tim Storms, who clocked in his range at TEN octaves! Do you know how incredible that is?? To give you some idea, go look at a full grand piano – it only has SEVEN full octaves!!

A Siren’s Work is Never Done

Obviously, there are SOOOOoooooo many things you can do to learn to sing. We just scratched the vocal surface today.

If you’re in Michigan, lemme know and you can learn at my studio; or we can Skype.

If not, find a teacher near you that can help you achieve your dream.

Remember you don’t have to take lessons every week either; some of my students are bi-weekly, and a couple over the years have even done monthly. Whatever you can afford is better than going it alone.

I first took singing lessons in high school. Decades later I’m still trying new vocal exercises and techniques. I never have stopped learning and growing as a singer. You shouldn’t either. 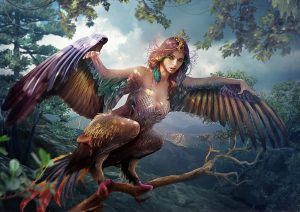 So work those singing muscles! Work ’em well, and you too can become the greatest siren of them all!

The most alluring star!

But be careful: it only takes one sound source at 1,100 dB to create a black hole that will summarily destroy our galaxy.

6 Replies to “How to Learn to Sing – Unleash the Siren Within!”