At least at Universal Audio Digital, it is!

If you’re here, there’s a good chance you already know that an Ocean Way Studio-full of UAD Plug ins are now on sale, through the end of December.

Cool, right?! You better believe it! We serious G.A.S.-ers need all the help we can get. But maybe you’re like I was earlier this month, asking…

Say no more! Say… no… MORE (nudge, nudge, wink, wink)! We’ve got ya covered. At least when it comes to plug ins, not “candid photography”.

We’ve jumped online and heard from real musicians, just like ourselves, about what they like and what works for them.

I HAD to do this, as I was “GEAR-ing” up for what I accomplished yesterday morning – my own plug in purchases.

Our goal today is two-fold:

The 1073 is one of the most highly-lauded and sought-after preamps in pro audio history… even to this day.

Until today, I was using UAD’s Legacy version of this heralded preamp. It has served me well, but, well, I didn’t know what I didn’t know…

All that changed yesterday morning when I spoke with Brandon, a tech support guy at UAD. He was quick to say that he’s not a salesperson; he’s just a Tech Support guy, but since I asked his informed opinion and he uses this stuff in his own studio, he gave me the straight-up goods.

His strongest endorsement over all the many UAD products we discussed was for the 1073 preamp and EQ. He said that he also used the “Legacy version” at one time, but then he upgraded to this current version (the one that’s on sale right NOW), and it was the most substantial upgrade in tone and quality he’s experienced.

He basically said there’s no comparison.

Now that I have both and have engaged them side by side on guitar and vocal tracks, I can see what he means. There is a difference, and I’m glad I spent the extra. It sounds truly worth it.

To investigate its potential for your own music, GO HERE.

Of all the plugins I heard about months of research, this plugin was the most beloved, recommended, extolled and celebrated. I don’t think I’ve ever seen a larger consensus on any piece of pro audio gear than I have on the EMT 140.

Before this time, I’ve always been either a Lexicon or TC Electronics man when it comes to reverbs.

But today, I’ve jumped onto the EMT bandwagon. So many high-end professionals ongoingly use this unit and sing its praises online… I just can’t ignore them anymore.

Because it’s a Plate Reverb, it won’t give you room emulations. That we’ll give you in a later plugin. But it only has limitations beyond its kind. Within its genre, it’s the king in the crown!

To see what I mean, GO HERE!

Universal Audio goes all the way back to 1958, when Bill Putnam Sr. launched the monster company that would revolutionize the recording world.

So many transformative products came out of those three corners of Bill’s mind, but among the greatest is certainly the 1176 compressor.

If you’ve been recording at all seriously and haven’t heard of the 1176 compressor… well, let’s just say you need a new group of friends and colleagues!!

Getting the UAD plug-in for the 1176 actually gets you three plugins – the Rev A, the Rev E, and the AE, each with its own sonic signature.

Trust me when I say that this is one of the most famous pro audio units ever made, and it’s scores of big name producers this very compressor on a daily basis.

That’s why you can’t go wrong. Sure, the 1176 is not preferred for “clarity”. It definitely brings its own color to a mix. But it’s a color that’s nearly idolized, beyond how well it actually reduces dynamics.

In 2010, esteemed producer Alan Parsons released his “Art and Science of Sound Recording” DVDs. For anyone wanting a glimpse into how Alan does what he does best (which is make the best-sounding records in history), this DVD series gives you a front row seat.

I invested in this product a few years back, to my happiness and benefit. I wouldn’t see them for anything and off and go back and re-watch them, for tips, tricks and inspiration. To investigate that bag of goodies, GO HERE!

It was on these DVDs that I got to witness Simon Phillips, the legendary session percussionist, playing drums for Alan. He goes into great detail about how he recorded his drums to make them sound so good.

Without giving everything away, I’ll just say that the SPL Transient Designer was a crucial link in his signal chain.

It’s so cool what this thing does, and what’s even cooler is there’s very few products that have this same combination of controls and tone-shaping tools.

In a nutshell, this software lets you shape and manipulate the sustain and the attack of your signal sources. Nothing else, just the attack and sustain.

For drums, this is an incredible, no-brainer godsend. I totally get why some of the finest engineers in the world have called it a “secret weapon” tool. The flexibility it affords you when mixing drums is unparalleled.

Yea… I love this thing!!

For an insider’s video, listen to it RIGHT HERE! 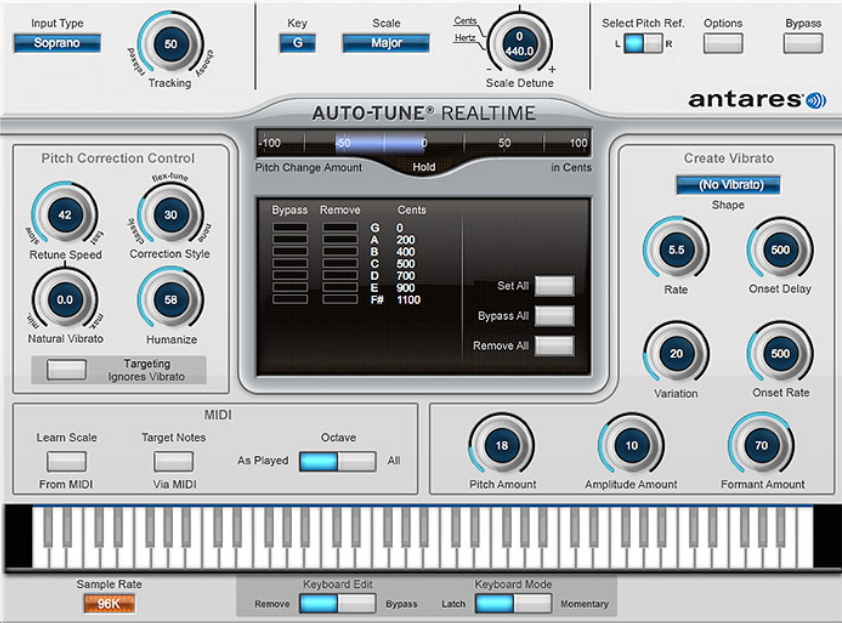 Ever since Cher first “Cher”-ed her robot voice love in her song “Believe” in 1998, the world has known what Autotune is.

Since then, this plugin has been put on everything. So much so that I believe that the common person’s perception of good pitch has improved dramatically, because almost all the vocals they hear on the radio now are so perfectly in tune.

Do you ever listen to Oldies stations?? Have you noticed that old songs that used to not bother you at all, now have vocals that sounds so sharp or flat you can’t stand it?! I’ve definitely found that to be true.

I won’t mention any songs by name, but man some of those 60s artists… they were WAY off!

Suffice it to say that even if you don’t need Autotune for tracking (I always track without it), it’s still good to have for mixdown.

Even if your voice doesn’t sound “off”, may want to apply a little Autotune just to get it to sound more like what the radio asking for, which these days… is vocal perfection.

Of course, it goes without saying that if you DON’T sing well, you’re reeeeally gonna need it!

Get all your T-Pain glory by GOING HERE.

The 480L by Lexicon is my second “must have” Reverb choice.

I remember this Lexicon device sitting to the left of our huge recording console at Bill Schnee Studios in North Hollywood, California, where are used to work.

Back then it looked so futuristic and New World-ish. But even better, its reverbs spread… like buttuh, baby!!

My favorite ‘verbs are still from Lexicon. What can I say? Old habits die hard.

It’ll pretty much give you all the algorithms you’ll need to sound amazing, and swim in rich, lush ambiance that would have even Whitney or Marvin smiling and nodding.

Do yourself a favor and go here to GET A ROOM!    lol

The reason I’m including this bundle is so that you can have all that you need to complete an album, or even just a song, professionally with just the seven plugins listed here.

Are there good reasons to buy any of the other plugins?? 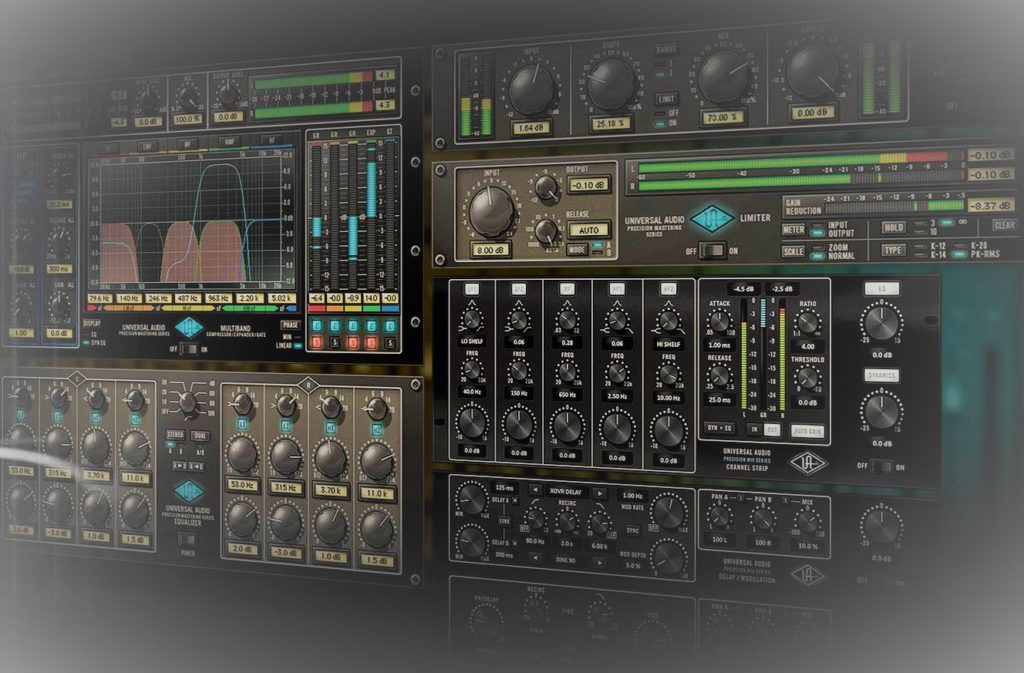 Of COURSE! Why do you think Gear Acquisition Syndrome is so rampant across the face of our planet?? There’s ALWAYS a good reason for more gear!! 😉

But if you’re a musician with limited resources to some degree ( most of us are), you’ll appreciate that you won’t need anything else to put something out that recognized as “well done”.

Until this year, I’ve always sent my albums out to a mastering engineer for the important last step of album-making.

For my next one, however, I’m giving up to do it myself, and this Precision Mastering Bundle will guide me through my first mastering journey.

These days software is becoming more and more intuitive towards our audio needs. I even viewed this year, at Sweetwater sound “Gearfest”, “track and mastering assistant” software from iZotope that can automatically make mixing and mastering decisions for you if you’re not scared of giving those adjustments over to a ROBOT!!   Lol

When it’s software Avatar is designed to look like C-3PO, I’m in!!

For now though, who has all you need to finish up your tunes. There’s plenty of free training on YouTube that will bring you up to speed, so don’t worry – you can do this!

If you have the plugins, that is. 😉

To go all Jedi and become a “Master”, CLICK HERE.

If you don’t already own a universal audio hardware interface, getting one this month means Santa’s gonna drop something extra special down your stocking and there will suddenly be a whole new world of endless audio carrots dangling in front of your face every day.

Be brave, soldier. Be brave. 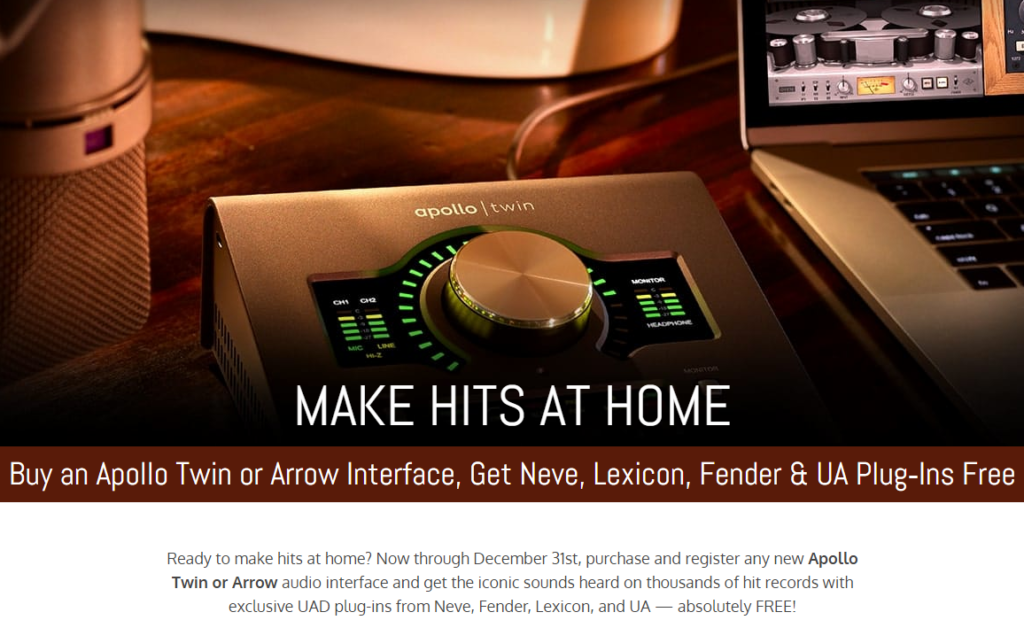 So until December 31st, if you buy the Apollo twin Duo, or USB, you get some really cool plugins thrown in for free!:

Since I now have and use the Neve 1073 and the Fender Tweed, and can vouch that they both are the bomb, for different reasons.

The Fender ’55 amp has an obvious retro kind of tone, so you wouldn’t use it for everything. But if you’re playing old school R&B, country, bluegrass, or if you want your chicken pickin’ or palm-muted staccato riffs to sound amazing (which is why I generally engage it), stick this character-crammed Deluxe into your signal chain.

The Oxide Tape Recorder I haven’t bought, because I already own Slate’s “Virtual Tape Machine“, which essentially does the same processing.

What I will say is that I absolutely LOVE what Slate’s plugin does to my final mixes, so if UAD’s version is even in the same ballpark (which I can’t imagine it wouldn’t be), I know you’re gonna dig it. It just simply makes everything sound… better.

As for the Neve 1073, I’ve already told you above how awesome that plug-in is – nothin’ more to say!

Now, you could buy the cheaper Apollo Twin “Solo”, or the cheaper-still UA “Arrow” interface, and with those you’ll get the “Legacy 1073” thrown in for free this month ’til December 31st.

But knowing what I know from Brandon, and from other Forum posts that I’ve read online, I’d save a bit more money and get at least the “Duo” interface. Not only do you get more free plugins (3 total, or 5 for the quad!), but higher quality to boot.

To glean a lot of info from the post I wrote specifically about the Apollo Twin interface, and get those cool plug ins, CLICK HERE.

Or just pick your store below and hatch your hit music factory in one fell swoop!! 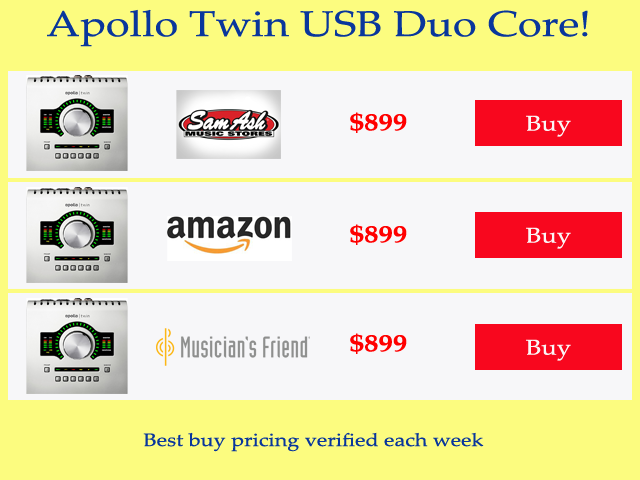 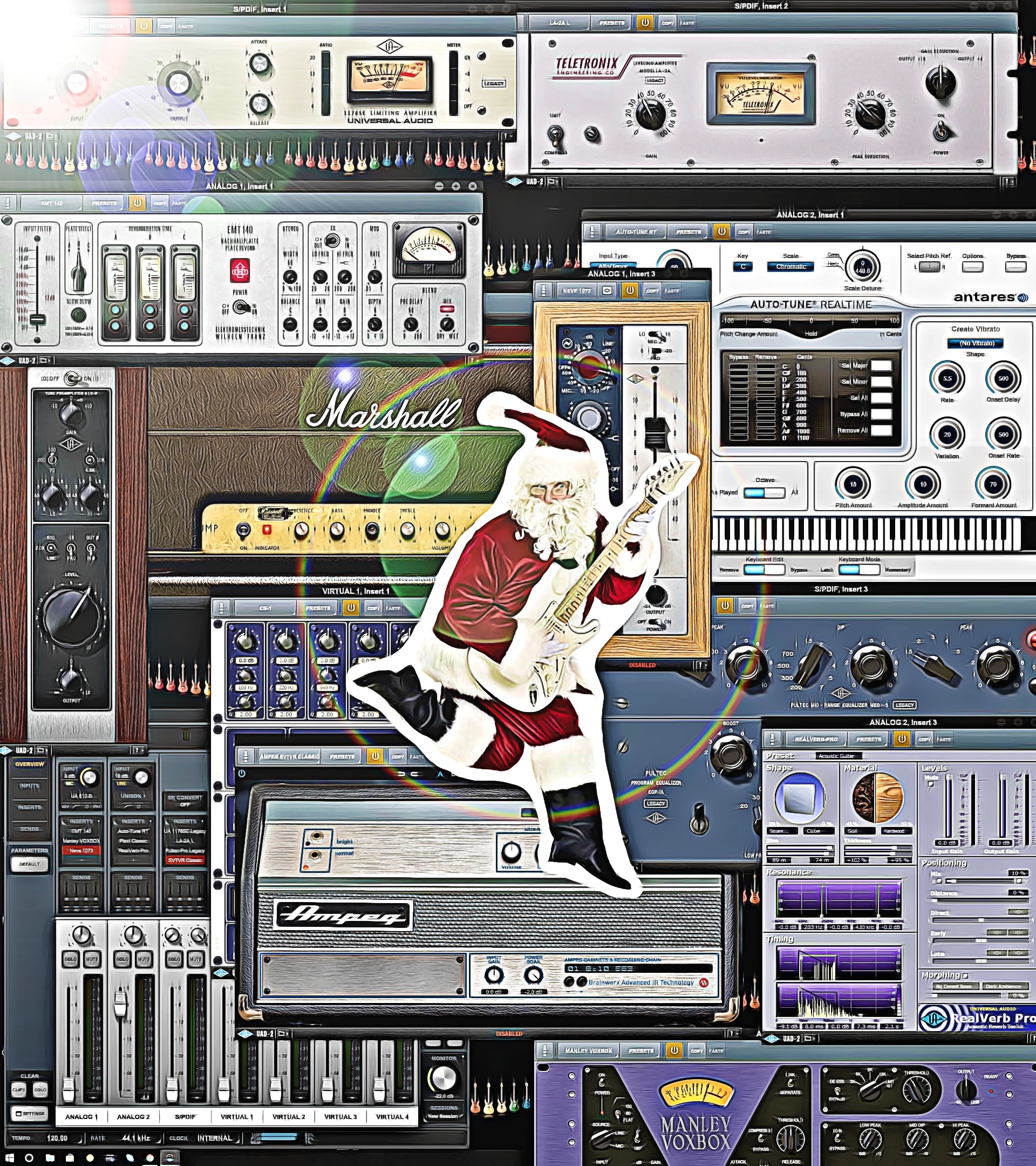 The last thing I’ll say is this: these seven “best plugins” are not just my opinion – I actually have the sanction of Brandon from UAD on all of these. Here’s what he said when I told him of my choices:

“I agree! All these are good first choices. You’ve got a little bit of everything that would be needed to record, mix, and make LOUD.  🙂 “

Now, if the man who has EVERY plug in you could possibly get from UAD, and uses them to record, says that…

The sale ends December 31st, and the prices will definitely go up substantially, so don’t dilly-dally.  ‘-)

So if you’ve been wondering which UAD products you should spend your hard-earned cash on, we hope this post has delightfully enlightened you.

May angelic tone rise up to meet you! And may the wind at your back never be your brother after eating Taco Bell! 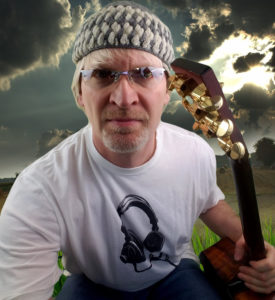 2 Replies to “UAD Plug Ins – Your 7 Essential Must-Haves For The Holidays!!”