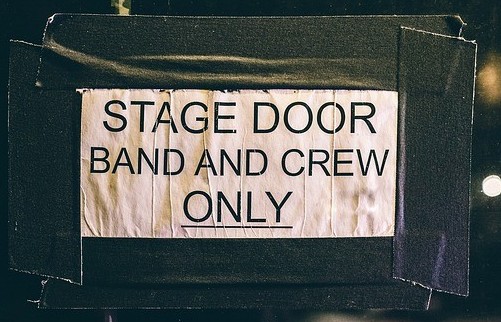 Okay, so…it might not be the most glamorous thing to write about, but speaking from experience, having a music gear cart for schlepping our beloved items back and forth from gigs can really save the day. Take this case in point….:

“You guys can’t use the backstage door anymore.”

“Somebody left it unlocked last week.”

“Sorry. From now on you’ll have to use the auditorium front doors.”

True story. Anybody else been there?? If it happened to me, it had to happen to some of you out there, and it’s never pretty. In fact, it outright sucks. But, this is exactly why having a gear cart for our music instruments and peripheral electronics and hardware is so crucial. When you’ve got long hauls to and from your car to get set up for a gig, you do NOT want to have to make 5 trips.

Oh, and by the way, those of you who play piccolo, pan flute or penny whistle for gigs…you can just tune out now.

Oh, wait….they’d never be reading this in the first place!!

Keep Yo’ Hands Off o’ My Stack!

There are some of us instrumentalists who, by the very nature of what’s socially expected of us to sound like, must come to a gig with a lot of stuff. Sometimes quite large stuff.

Yes, I’m talking to you bass players, Electric guitarists, drummers, percussion and keyboards dudes and dudettes. I feel your pain. Not every gig calls for your full arsenal, but many do, and that’s when you won’t possibly be able to transport all your needed gear in one trip.

This is where we need a helping….uh, wheel, or four, to keep us efficient and on time.

There are musicians out there who like to be on time, right??

I have personally stacked my cart so high with stuff I had to use bungees to maintain it’s resistant to leaning, and thus guarded it against the mischievous greed of gravity. When I have to be the electric guitar axeman, this is my leaning tower. Gratefully, I’ve not yet had to carry my big guns to a gig: the double 4×4 cabinet stack with amp on top. They reside joyfully (and heavily) in my studio for recording. But I have many times taken my medium rig out, which consists of:

For these types of gigs, my cart is my best friend. Until I hit the stage. Then it’s my guitars.  😉

Let’s take a look at some current options…

There are probably a dozen or more options for music gear transport, and there’s even more options when you consider carts that weren’t exactly made for music gear, but will get the job done. Today, I’m gonna wheel us through (PUN ALERT!) a few options that I’ve actually seen people use, that get good customer ratings and that I would use myself. ‘Cuz I don’t have a roadie.

What Goes Around, Comes Around…that’s KARMA! 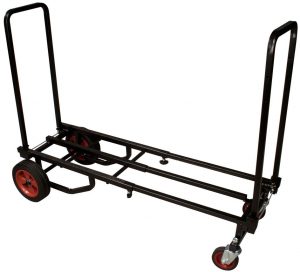 Ultimate Support is a company that has been around serving us musicians for decades. Their carts have come in handy for many for years.

Although they only offer two carts that handle weights only up to 300 lbs, for those who do not have to schlep more than that (I’m trying not to envy you) they’re just the ticket.

I see the bigger of the two mostly: the JS-KC90 Karma cart. It has eight different configurations, is small but hardy, and ships with hard wheels that will never go flat. Gotta like that.

It also folds up nicely when you’re done using it, so you can stuff it behind a speaker or amp… just get it outta the way until it’s load-out time again. Versatile and simple to use.

Been A Long Time Since I “RocknRoller”-ed… 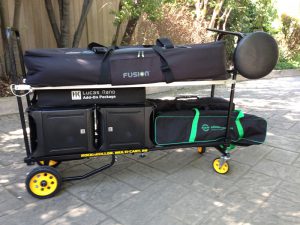 The RocknRoller Multi-cart has been around for quite some time, and it is by far the one I see the most when gigging.

I was first turned onto this my fellow axe-man and EVH fan John Fiaschetti (you can see him playing HERE).

He kept rolling his gear in using this and I noticed that it always looked stable and yet big enough to bring in all his electric guitar accouterments, no problemo.

It’s pretty versatile;  you can configure it eight different ways also, just like the Ultimate cart, to maximize efficiency, and form, for your own particular equipment needs.

The picture to the right also shows the carpeted upper shelf that you can buy as an extra option. That’s if you want to have TWO piles o’ stuff as you roll, instead of one super MASSIVE pile. Choose your poison.

Like the other, it folds nicely. This cart has the added benefit though that there’s no pins or loose parts to LOSE (‘cuz you just know that’ll happen!); it’s one simple construct that does the job but tucks compact out of place when you’re not needing it. This is, indeed, my choice for my own personal gear haulin’ adventures. 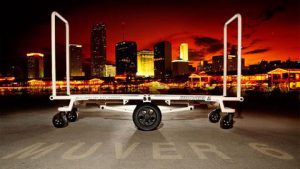 If you need a little extra “oomph” for taking in gear that’s big, bulky, heavy and would make a gorilla stop gigging, you may want to move up to this little treat: the Gruv Gear Muver 6!

I see not only musicians, but, when I’m film acting, lighting guys and set technicians using these. They’re also popular with DJs, who, God bless ’em, really have to lug gear.

They are pretty indestructible if you keep within the weight limitations, which for the Muver6 is 750 pounds.

Additionally, tbey have other options that are smaller, like most of these companies, but the Muver6 appears to be quite popular across the board and gets good recommendations for those that use it long-term.

You Got to ROLL With It Baby…!

Let’s face it: if you want to save time and effort getting to and from gigs, you can really use a dependable gig cart. The three reviewed above have great reputations, and I would use each of them in a heartbeat for different sized loads.

If you are gigging out and have to take more than just your instrument in a case, be smart – get a cart. 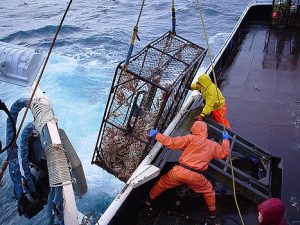 And if the thought ever comes to you, “Geez, haulin’ this stuff around is for the birds…” 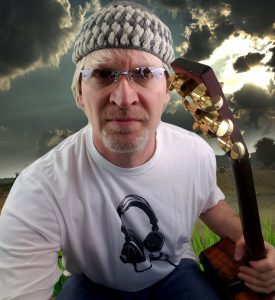 2 Replies to “After Decades of G.A.S….it’s Time For a Music Gear Cart!”