The shot heard ’round the world.

That’s what some have called the guitar solo that Eddie Van Halen performed in Sunset Studio 1 in Los Angeles on September 8th, 1977. Forty years ago last month. It’s called “Eruption”.

If you’ve never heard this piece, go look it up now, and really give it a good listen, with headphones preferably. You might then understand what a shock wave was felt through the music industry and the music-buying public because of that solo. It’s only a minute and forty-three seconds long, but it absolutely floored anyone who’d ever had a guitar in their hands before that moment.

Additionally, no one before and, in my opinion, no one since has come anywhere close to performing something so technique-altering, so paradigm-shifting, and so inspirational to the musical masses.

If you want something closer to pop radio approachability, consider why Michael Jackson, at the height of his fame, chose Eddie to play the solo for “Beat It”, a solo now so iconic that you can find copies of it everywhere online with the rest of the song removed, so you can hear just the solo. There’s a reason.

So, when a guitar player of this caliber decides to launch a guitar line to reflect his prowess, skill and artistic sentiments, what does he come up with? The answer, which is available to all of us now, is EVH Guitars!

Like any good solo, Eddie’s stab at guitar making started light and, now at present, is monster HUGE! Here is the total list of guitar making trials and errors that he has endured over the years, in order of production, as a “tone chaser”, as he calls it, trying to perfect his vision for the perfect guitar:

There were even more little one-offs that Eddie did here and there, but these are the biggies. As you can see, the man has always been honing, finessing, striving to get to the proper mixture of guitar tone and mechanics that will leave him completely satisfied.

The jury is still out as to whether that’s even possible at this point, but he at least has been smiling a lot more since Fender partnered with him for his EVH line. It appears they are the big crescendo to his guitar-building penchant.

What Guitar Dreams Are Made Of

Currently Eddie’s line-up out of the Fender factory consists of the following options, most expensive to least:

Keep in mind that the prices listed are retail prices listed on the EVH site. If you truly want one of these beauties, they’ll more than likely be a couple hundred less, possibly more. Don’t expect too much off though, because these guitars are typically not returned due to dependable craftsmanship and customer loyalty. I, for example, will never be selling mine. Ever.

I have not personally played the Standard yet, but I’ve played all the others and been very satisfied with what I’ve heard. And, as you’ll see below, I bought one.

If you want the specific specs for each, check ’em out here. 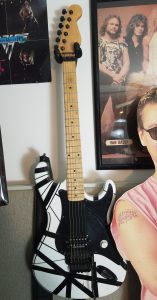 Having been an Eddie fan since my childhood, I have a few axes in my studio that reflect that hero worship. The first two are not actually guitars by EVH by Fender. Couldn’t be since I bought them before Fender and Eddie even had a deal! But I thought I’d give you a look since, if you’re here, you’re probably gonna dig ’em.

My first score was this handmade replica of the first guitar that Eddie made all by his lonesome, the black and white edition of his “Frankenstrat”. This astoundingly accurate reproduction was crafted with love by a boutique shop down in Florida called Mean Street Guitars. Obviously Mitchel, the owner and builder, shares the VH love! Because of legal action he can no longer make exact replicas, so I got in just under the wire here, snagging this treat.

When I first plugged this into an amp and started playing the chords to “Mean Street”, I tell you… I was so geeked. It sounded SOOOOOOO much like the original records.

You know how it is: if you can not only practice songs so much that you have them down cold, but also have the right GEAR to nail the tone… dude. There’s nothing like that sound. It’s almost like the legend is in the room with you. And talk about a simple guitar: one pickup, one knob.

Red Lights Up the Sky!

My second Eddie guitar is also not from his current EVH/Fender line, but I’m including it because… well, it’s the iconic EVH guitar, and I am still stoked to own one. This is a replica of Eddie’s red, white and black striped “Frankenstrat”.

I don’t know who made it because I bought it used and there’s no info anywhere on the guitar that I can find without tearing it open. What I can tell you is I’ve compared it to quite a few pictures of Eddie’s original and whoever made this did an OUTSTANDING job replicating it. And not only how it looks – this thing ROCKS!!

One thing about these early models, though, you should know. They were not the epitome of what Eddie really wanted to attain. They were pretty much all he could afford before Van Halen became mega-stars. The whammy action, for example, is not nearly as elegant and smooth as any of the current models.

But here’s the thing: if you are practicing any of his early works, say “Eruption” or “Mean Street”, or “Beautiful Girls”, it’s really telling to learn them on replicas like these, or the ones put out by EVH now. It allows you to feel what it felt like for him when he accomplished those gems.

But don’t get me wrong – I still want the new stuff too!

My Own EVH Guitar Right Now

Which brings us to this star of my G.A.S. wall in my studio: the EVH Wolfgang Special! This guitar might not be as flashy as his earlier “spray paint and tape” artistic looks, but if you want a guitar that is well-made, smooth, has great tone and consists of some of the finest materials available these days to guitar makers at its price point, the Special, or it’s big brother, the Wolfgang, will make you JUMP for joy. Yes, I had to do that. lol

I actually played both the Wolfgang and the Wolfgang Special through an EVH 5150 amp for some hours at a local shop years ago, to ascertain whether the extra money for the Wolfgang was worth it. After a lot of playing, testing harmonics, pickup tones, volume knob swells a la “Cathedral”, high-neck solo shredding… I came to the conclusion that I really wouldn’t be losing anything by getting the lesser-priced model; the Special sounded killer!

The Wolfgang and the Wolfgang Special look a bit different, mostly because the Special has a flat top and the Wolfgang has an arched top. This also means that the Wolfgang feels a bit heavier and beefier than the Special. Other differences on the Special: no binding around the edge; made in Japan; not as many finish options and cheaper hardward. That’s what the specs say. What I found was that I could hardly tell the difference in sound, which for recording is what’s important, but the little difference I did hear gave the Special the edge! Go figure.

No regrets on that decision either. I did mod my Special in one way: I fitted it with a titanium block under the whammy, replacing the bronze block it came with. This is because I wanted ultimate sustain on my new sound beast and, after researching, discovered that the titanium block added sustain more than other metals. The company “F.U.” out of Pennsylvania provided my part, and after installing it myself I definitely noticed a difference. There’s a reason why big guitar slingers have all gone to Adam for his mods. They work. Check him out here.

Everything I’ve used my Wolfie on has benefited from it’s sound. Its tone and feel and accessibility is really unrivaled by any other guitar hanging on my wall, with one exception: my Paul Reed Smith. It’s kind of apples and oranges though, because the PRS (reviewed here) is a fantastic all-around, versatile guitar. My Wolfie is more for when I don’t need so much versatility, but rather just good, shimmery, light clean tone and smash-your-face-in heavy, dinosaur rock tone. When that’s on the docket, the Special is the first axe off my wall. And we’re one foot out the door with a big smile in tow!

Finally, to round out my “Eddie-inspired” collection, and for your VH-lovin’ pleasure today, I show you this little gem: the mini-Les Paul replica of the guitar that Eddie composed and played my favorite Van Halen song on: “Little Guitars”. I had kept my eyes out for one of these for years, and finally, two years ago, one showed up in a local used music instrument store. I nabbed it immediately and couldn’t wait to get home and finally play my fave VH tune like it was originally composed.

See, I learned this song back in the day it came out, but, unfortunately, I learned it from a guitar magazine that had the tablature so COMPLETELY WRONG that to this day I wonder what they were thinking. Still, I practiced those bizarre fingerings and awkward positions until I got it down, because this song, for me, tops the list. It was only years later I discovered that Eddie had written it on a mini guitar like this, with a totally different tuning than standard. This was why the magazine tablature, written for standard tuning, was such a nightmare. It was just wrong; so, so wrong.

When you have the right tool for the job, though, the fingerings are mostly all familiar and far easier to accomplish. You can do this song the right way with a normal guitar, you just have to change the tuning and capo it at the 5th fret. The big difference there, though, is the fret sizes are much bigger than on this mini guitar, so for some of the chords you’ll be stretching more than Eddie actually does.

I like to use this guitar to compose with too. Makes it almost impossible for others hearing my songs to figure out what I’m doing. Just like that guy who tabbed “Little Guitars” completely wrong!!!   lol

Everybody Wants Some of These EVH Beauties

Guitars are such subjective desires. Don’t I know it. Looks have a lot to do with it, as well as tone, feel, scale, wood, blah, blah, blah. I get it. a guitar can be built with all the finest materials, and truly be a masterpiece of luthiership, and many will still not like it. C’est la vie.

Regardless, David at Guitar Center, Southfield tells me the current EVH models are still in demand and they have an excellent reputation for not coming back. If you’ve not played one, get out there, plug in, rock out, and channel your inner guitar god. You’ll be amazed how EVH will burnish your fiery-fingers image! The lowest price for a Wolfgang Special, what I own, is currently $999, no matter what store you look at. This link will take you to a further review of the specs and send you one immediately if you’re ready to embark on the journey!

Do you already own a Wolfie? Or any of the earlier iterations of Eddie’s creative force from Charvel, Peavey, Music Man, etc.? Lemme know what they do for you, and what you’ve done for them. Leave some comments; share the love. We guitar-slingers have insights that non-axe-types just will never understand…

Who else would spend $400 on a block of titanium? LOL

6 Replies to “EVH Guitars – For Clean or Mean Streets, They’ll Drive You Wild!”