In 1995, I saw an ad that stopped me in my tracks. And my recording world would never be the same.

Funny how that ad so long ago has led straight to this AT4050 review.

But before we go there, let’s go even further back… to dear ol’ high school!

I’d been in marching band since 7th grade, and one day a trombone player named Mike let me borrow an album called “Turn of a Friendly Card”.

It was like I’d entered another world. This brass trumpet boy would never be the same!

I loop-listened the cassette tape (yea, i know) endlessly. It was so captivating.

Both the exquisitely arranged, dramatic layers of orchestral instruments, and the lyrics which showed you scenes and people from some Middle-Earth-meets-King-Arthur country castle, took my imagination into a custody it has never escaped from to this day.

Mostly ‘cuz… it doesn’t want to!

The artist was Alan Parsons, and the reason why I was immediately snared by that ad in ’95 was because Alan’s picture filled most of the page.

He was looking us right in the eye, and extending his own hand to us, mesmerizing us into considering one… black… microphone…

An Eye in the Sky 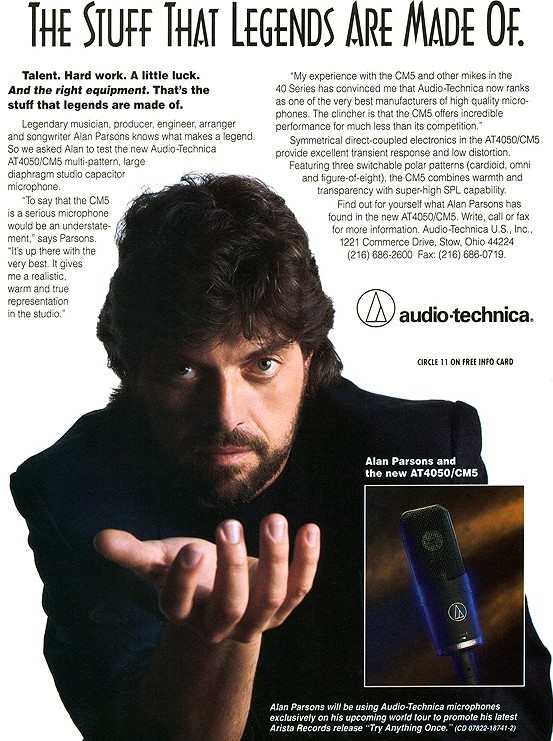 Alan Parsons was the studio engineer for the Beatles’ “Let It Be” and Pink Floyd’s “Dark Side of the Moon”, two albums that loom gigantic in the pantheon of “best albums ever made”.

After that he turned his attention to his own artistry, and succeeded in anointing the 80s with hit after hit using his own hand-picked musicians, which were different for every song, à la Steely Dan.

Through it all, Alan was the lead engineer. The man knows his gear. Decades of it. If he says a product is good, then you must not be using it right if you didn’t get great results. This is why, when he joined with Audio-Technica to put out the ad you see to the right, I knew it had to be stellar.

And just think: he must’ve suffered through months of G.A.S. throughout his career. That poor man.  ;-o

The ad ran for a few years and did a splendid job of knockin’ the AT4050 sales right outta the ballpark – right into the sky’s eye!

Today, Alan’s relationship with Audio-Technica is stronger than ever. So much so that, in 2010 when Alan released his “Art and Science of Sound Recording” series, Audio-Technica was the biggest sponsor. I own this series (yes, it’s awesome) and through it all the 4050 is there, in scene after scene, mic-ing some of the world’s best musicians and bringing songs to life with its versatility, clarity and durability.

Audio-Technica has taken this mic to the bank, no question!

Now that you know how respected Alan is, let’s take a look at some of the specs of the mic that he still utilizes to this day.

The AT4050, purchased today, includes the following features and elements:

These specifications sound great, but as we know, a mic can have great specs and still sound like… uh, well, nothing pleasant. So let’s sing deeper…

I have used this mic on so many vocals and instruments I couldn’t possibly count them. I love what it does for my voice, which is why it’s one of my top three go-to mics for tracking my vocals.

Recently I did a mic shoot-out here in Schlenk Noyz Studio to put the new Aston Spirit mic through its paces. Shoot-outs are little games we audio engineers like to play where you record the exact same performance on different gear and see how each one delivers. Not only does it provide extremely insightful data that can be used on every session in the future, it’s also… a ton of fun!

If you want to hear the actual sound files from that session to see how the AT4050 fared on both vocals and acoustic guitar (in a word, it still was awesome) then go here.

Suffice it to say that my heavy studio use of the AT4050 has shown it to consistently provide a sound for vocals that really cuts through a pop-produced mix. If I am recording a stripped down piece with just acoustic guitar and voice I will often let my Oktava tube mic warm the waveforms, but even then I still prefer the AT4050 sometimes.

Obviously, we know with any mic that it’s going to suite different sounds better than other. I love the Neumann U-87 on female voices, for example, but on my voice the 4050 sounds better every time. Oh, yea, and it’s thousands of dollars less.

This mic is so adaptable in its quality that no matter what you try it on, I can’t ever see it sounding bad. If you can’t afford the “sell-your-car-to-get-it” prices of some higher end mics, this would be an excellent step in the right direction for you. Most would never know you didn’t use the most expensive, because the majority of the masses don’t have that kind of ear.

Especially if you’re producing tracks with a full band, you really should try this on vocals. Just might become your “secret weapon” of choice.

A Pyramid of Aural Pleasures

From bottom to top, I’ve thrown the 4050 on frequencies all along the perceived audio spectrum and have always been pleased with the outcome. That doesn’t mean I use it on everything; I have other mics that I devote to certain instruments because they always flatter. Every mic has a certain “color”, after all, and no one wants the same color every time.

But the point is – I could use the 4050 on everything without fear that I’d get a bad result.

Here’s what I can remember of instruments my 4050 has captured and complemented in the studio:

The only thing I haven’t tried it on is drums, because I already have a large selection of mics for my two kits that I chose deliberately because they are known to drizzle the awesome sauce on drum sounds. The AT4050 can definitely be used for drums tho’, since it has an extremely high SPL rating. Audio-Technica’s site mentions specifically using the mic for drum overheads.

Want another helpful file? You can also hear the 4050 on recordings I made showcasing the new Warm Audio TB12 mic pre (another favorite gear piece of mine) here. Same bevy of mics as the recordings above, but all run through a mic pre instead of D.I.-ed.

If I were, today, in the situation I was back in the 80s, living as a starving artist in L.A. in that little apartment with my band in Reseda, I could have really used a mic like this that can do it all and stand up to the punishment. It’s just proof that you don’t have to spend your college fund to get a mic that will record you in way that sounds great and gets you noticed. I know. I’ve done it.

Old and Wise, or Young and Frosty – Get This Mic!

Well, what more needs said? Obviously, my experience with the AT4050 as a gold standard here in Schlenk Noyz Studio speaks volumes. I love what it does to my voice, and it continues to be in my top 3 mic choices as it has for the last 3 decades.

Combine that with the endorsement of our esteemed Mr. Parsons, and you’ve got a microphone that could just be giving you bubbly G.A.S… RIGHT NOW! Yes?!

Get the amazing Audio-Technica AT4050 right here:

Or, if you’re an Amazon PRIME member, like my family, get with FREE SHIPPING:

When you do, drop me a line and tell me how you’re liking it. Even share a recording. That’s what we do, right?!

Leave your comments below and, as always, if you want some more insight just holler. I could go on about this darn mic aaaaaaall daaaaaaaay….